External compactions are a new feature in Accumulo 2.1.0 which allows compaction work to run outside of Tablet Servers.

Before we explain the implementation for external compactions, it’s probably useful to explain the changes for major compactions that were made in the 2.1.0 branch before external compactions were added. This is most apparent in the tserver.compaction.major.service and table.compaction.dispatcher configuration properties. The simplest way to explain this is that you can now define a service for executing compactions and then assign that service to a table (which implies you can have multiple services assigned to different tables). This gives the flexibility to prevent one table’s compactions from impacting another table. Each service has named thread pools with size thresholds.

The configuration below defines a compaction service named cs1 using the DefaultCompactionPlanner that is configured to have three named thread pools (small, medium, and large). Each thread pool is configured with a number of threads to run compactions and a size threshold. If the sum of the input file sizes is less than 16MB, then the major compaction will be assigned to the small pool, for example.

To assign compaction service cs1 to the table ci, you would use the following properties:

A small modification to the tserver.compaction.major.service.cs1.planner.opts.executors property in the example above would enable it to use external compactions. For example, let’s say that we wanted all of the large compactions to be done externally, you would use this configuration:

In this example the queue DCQ1 can be any arbitrary name and allows you to define multiple pools of Compactor’s.

A Compactor is started with the name of the queue for which it will complete major compactions. You pass in the queue name when starting the Compactor, like so:

There are several situations involving external compactions that we tested as part of this feature. These are:

Compactors periodically check if the compaction they are running is related to a deleted table, split/merged Tablet, or canceled user initiated compaction. If any of these cases happen the Compactor interrupts the compaction and notifies the Compaction Coordinator. An external compaction continues in the case of Tablet Server death, Tablet migration, Coordinator restart, and the Table being taken offline.

The following tests were run on a cluster to exercise this new feature.

For these tests Accumulo, Zookeeper, and HDFS were run on a cluster in Azure setup by Muchos and external compactions were run in a separate Kubernetes cluster running in Azure. The Accumulo cluster had the following configuration.

The following diagram shows how the two clusters were setup. The Muchos and Kubernetes clusters were on the same private vnet, each with its own /16 subnet in the 10.x.x.x IP address space. The Kubernetes cluster that ran external compactions was backed by at least 3 D8s_v4 VMs, with VMs autoscaling with the number of pods running. 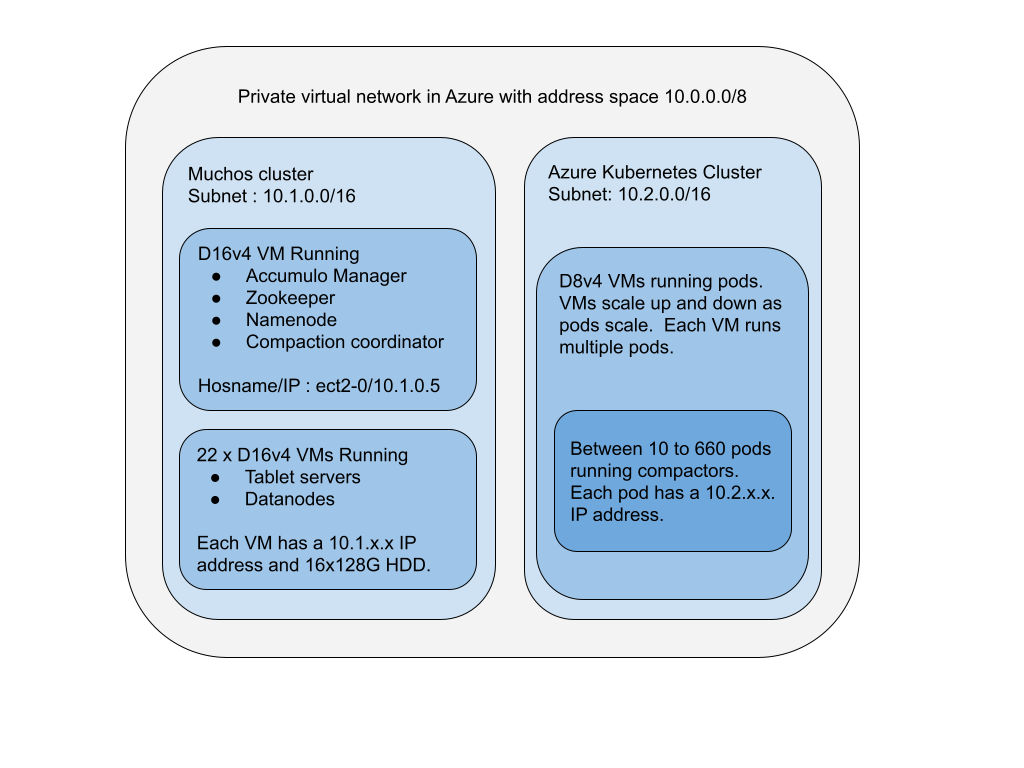 One problem we ran into was communication between Compactors running inside Kubernetes with processes like the Compaction Coordinator and DataNodes running outside of Kubernetes in the Muchos cluster. For some insights into how these problems were overcome, checkout the comments in the deployment spec used.

The Compaction Coordinator was manually started on the Muchos VM where the Accumulo Manager, Zookeeper server, and the Namenode were running. The following command was used to do this.

The Docker image was tagged and then pushed to a container registry accessible by Kubernetes. Then the following commands were run to start the Compactors using accumulo-compactor-muchos.yaml. The yaml file contains comments explaining issues related to IP addresses and DNS names.

The following plot shows the number of compactions queued. When the compactions queued for cs1_small spiked above 750, it was adjusted from 4 threads per Tablet Server to 6 threads. This configuration change was made while everything was running and the Tablet Servers saw it and reconfigured their thread pools on the fly.

The metrics emitted by Accumulo for these plots had the following names.

Tablet servers emit metrics about queued and running compactions for every compaction executor configured. User can observe these metrics and tune the configuration based on what they see, as was done in this test.

The following plot shows the average files per Tablet during the test. The numbers are what would be expected for a compaction ratio of 2 when the system is keeping up with compaction work. Also, animated GIFs were created to show a few tablets files over time.

The following is a plot of the number Tablets during the test. Eventually there were 11.28K Tablets around 512 Tablets per Tablet Server. The Tablets were close to splitting again at the end of the test as each Tablet was getting close to 1G.

The following plot shows ingest rate over time. The rate goes down as the number of Tablets per Tablet Server goes up, this is expected.

The following plot shows the number of key/values in Accumulo during the test. When ingest was stopped, there were 266 billion key values in the continuous ingest table.

After running everything mentioned above, the continuous ingest verification map reduce job was run. This job looks for holes in the linked list produced by continuous ingest which indicate Accumulo lost data. No holes were found. The counts below were emitted by the job. If there were holes a non-zero UNDEFINED count would be present.

How to Scale Up

We ran into several issues running the Compactors in Kubernetes. First, we knew that we could use Kubernetes Horizontal Pod Autoscaler (HPA) to scale the Compactors up and down based on load. But the question remained how to do that. Probably the best metric to use for scaling the Compactors is the size of the external compaction queue. Another possible solution is to take the DataNode utilization into account somehow. We found that in scaling up the Compactors based on their CPU usage we could overload DataNodes. Once DataNodes were overwhelmed, Compactors CPU would drop and the number of pods would naturally scale down.

To use custom metrics you would need to get the metrics from Accumulo into a metrics store that has a metrics adapter. One possible solution, available in Hadoop 3.3.0, is to use Prometheus, the Prometheus Adapter, and enable the Hadoop PrometheusMetricsSink added in HADOOP-16398 to expose the custom queue size metrics. This seemed like the right solution, but it also seemed like a lot of work that was outside the scope of this blog post. Ultimately we decided to take the simplest approach - use the native Kubernetes metrics-server and scale off CPU usage of the Compactors. As you can see in the “Compactions Queued” and “Compactions Running” graphs above from the full table compaction, it took about 45 minutes for Kubernetes to scale up Compactors to the maximum configured (660). Compactors likely would have been scaled up much faster if scaling was done off the queued compactions instead of CPU usage.

The Kubernetes Pod termination process provides a mechanism for the user to define a pre-stop hook that will be called before the Pod is terminated. Without this hook Kubernetes sends a SIGTERM to the Pod, followed by a user-defined grace period, then a SIGKILL. For the purposes of this test we did not define a pre-stop hook or a grace period. It’s likely possible to handle this situation more gracefully, but for this test our Compactors were killed and the compaction work lost when the HPA decided to scale down the Compactors. It was a good test of how we handled failed Compactors. Investigation is needed to determine if changes are needed in Accumulo to facilitate graceful scale down.

The other major issue we ran into was connectivity between the Compactors and the other server processes. The Compactor communicates with ZooKeeper and the Compaction Coordinator, both of which were running outside of Kubernetes. There is no common DNS between the Muchos and Kubernetes cluster, but IPs were visible to both. The Compactor connects to ZooKeeper to find the address of the Compaction Coordinator so that it can connect to it and look for work. By default the Accumulo server processes use the hostname as their address which would not work as those names would not resolve inside the Kubernetes cluster. We had to start the Accumulo processes using the -a argument and set the hostname to the IP address. Solving connectivity issues between components running in Kubernetes and components external to Kubernetes depends on the capabilities available in the environment and the -a option may be part of the solution.

In this blog post we introduced the concept and benefits of external compactions, the new server processes and how to configure the compaction service. We deployed a 23-node Accumulo cluster using Muchos with a variable sized Kubernetes cluster that dynamically scaled Compactors on 3 to 100 compute nodes from 10 to 660 instances. We ran continuous ingest on the Accumulo cluster to create compactions that were run both internal and external to the Tablet Server and demonstrated external compactions completing successfully and Compactors being killed.

We discussed also running the following test, but did not have time.

The test we ran shows that basic functionality works well, it would be nice to stress the feature in other ways though.