Traditionally, Apache Accumulo can only operate within the confines of a single physical location. The primary reason for this restriction is that Accumulo relies heavily on Apache ZooKeeper for distributed lock management and some distributed state. Due to the consistent nature of ZooKeeper and its protocol, it doesn’t handle wide-area networks (WAN) well. As such, Accumulo suffers the same problems operating over a WAN.

Data-Center Replication is a new feature, to be included in the upcoming Apache Accumulo 1.7.0, which aims to address the limitation of Accumulo to one local-area network (LAN). The implementation makes a number of decisions with respect to consistency and available which aim to avoid the normal “local” operations of the primary Accumulo instance. That is to say, replication was designed in such a way that enabling the feature on an instance should not affect the performance of that system. However, this comes at a cost of consistency across all replicas. Replication from one instance to others is performed lazily. Succinctly, replication in Accumulo can be described as an eventually-consistent system and not a strongly-consistent system (an Accumulo instance is strongly-consistent).

Because replication is performed lazily, this implies that the data to replicate must be persisted in some shape until the actual replication takes place. This is done using Accumulo’s write-ahead log (WAL) files for this purpose. The append-only nature of these files make them obvious candidates for reuse without the need to persist the data in another form for replication. The only necessary changes internally to Accumulo to support this is changing the conditions that the Accumulo garbage collector will delete WAL files. Using WAL files also has the benefit of making HDFS capacity the limiting factor in how “lazy” replication can be. This means that the amount of time replication can be offline or stalled is only limited by the amount of extra HDFS space available which is typically ample.

RPC from primary to peer

Like the other remote procedure calls in Accumulo, Apache Thrift is used to make RPCs from the primary Accumulo instance to a peer instance. The purpose of these methods is to send the relevant data from a WAL file to the peer. The Master advertises units of replication work, a WAL file that needs to be replicated to a single peer, and all TabletServers in the primary instance will try to reserve, and then perform, that work. ZooKeeper provides this feature to us with very little code in Accumulo.

The amount of data read from a WAL and sent to the peer per RPC is a configurable parameter defaulting to 50MB. Increasing the amount of data read at a time will have a large impact on the amount of memory consumed by a TabletServer when using replication, so take care when altering this property. It is also important to note that the Thrift server used for the purposes of replication is completely separate from the thrift server used by clients. Replication and the client service servers will not compete against one another for RPC resources.

Replay of data on peer

Because there are many TabletServers, each with their own BatchWriter, potential throughput for replication on the peer should be equivalent to the ingest throughput observed by clients normally ingesting data uniformly into Accumulo. 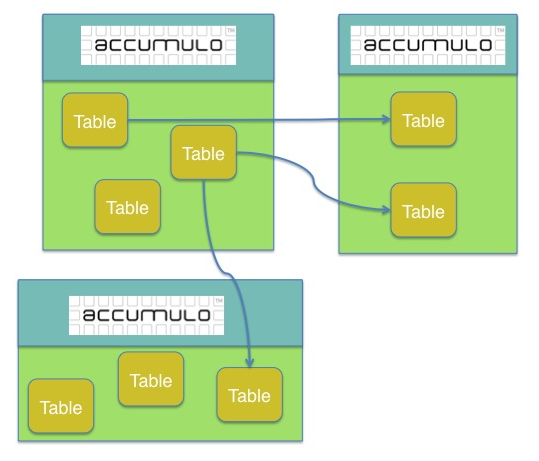 So far, we’ve only touched on configurations which have a single primary and one to many peers; however, the feature allows multiple primary instances in addition to multiple peers. This primary-primary configuration allows data to be replicated in both directions instead of just one. This can be extended even further to allow replication between a trio of instances: primaryA replicates to primaryB which replicates to primaryC which replicates to primaryA. This aspect is supported by including provenance of which systems an update was seen inside of each Mutation. In “cyclic” replication setups, this prevents updates from being replicated indefinitely.

Supporting these cycles allows for different collections of users to access physically separated instances and eventually see the changes made by other groups. For example, consider two instance of Accumulo, one in New York City and another San Francisco. Users on the west coast can use the San Francisco instance while users on the east coast can use the instance in New York. With the two instances configured to replicate to each other, data created by east coast users will eventually be seen by west coast users and vice versa. 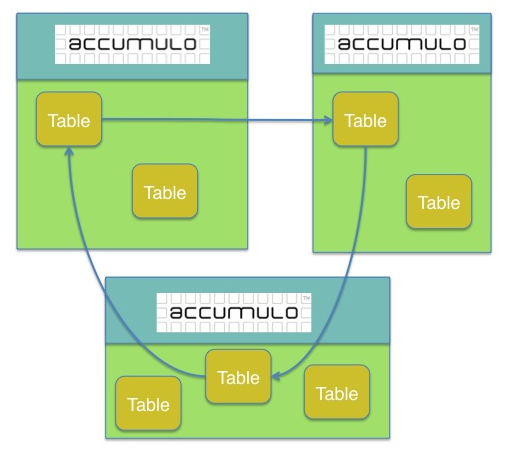 The addition of the replication feature fills a large gap in the architecture of Accumulo where the system does not easily operate across WANs. While strong consistency between a primary and a peer is sacrificed, the common case of using replication for disaster recovery favors availability of the system over strong consistency and has the added benefit of not significantly impacting the ingest performance on the primary instance. Replication provides active backup support while enabling Accumulo to automatically share data between instances across large physical distances.

One interesting detail about the implementation of this feature is that the code which performs replication between two Accumulo instances, the AccumuloReplicaSystem, is pluggable via the ReplicaSystem interface. It is reasonable to consider other implementations which can automatically replicate data from Accumulo to other systems for purposes of backup or additional query functionality through other data management systems. For example, Accumulo could be used to automatically replicate data to other indexing systems such as Lucene or even relational databases for advanced query functionality. Certain implementations of the ReplicaSystem could perform special filtering to limit the set of columns replicated to certain systems resulting in a subset of the complete dataset stored in one Accumulo instance without forcing clients to write the data to multiple systems. Each of these considerations are only theoretical at this point; however, the potential for advancement is definitely worth investigating.